Cost optimization for Axon Server deployments without sacrificing performance is very important to our customers. The most commonly used technique is the optimization of storage for the events. To cater for this storage optimization, Axon Server Enterprise Edition (ASEE) provides the concept of multi-tiered storage - secondary server node. This capability not only helps lower storage costs but also helps retain the performance and in some cases actually improvising it.

This technique splits the storage of events across multiple nodes within an ASEE cluster. ASEE nodes have designated roles within a cluster:  Primary  / Backup and Messaging-Only.

ASEE introduced a new role - Secondary since version 4.4, to cater for this split (also known as multi-tier) storage requirement. By designating a node as a “Secondary” node within a cluster, the storage of events is distributed between the “Primary” and “Secondary” nodes.

How do the secondary server nodes in Axon Server work?

Once the catchup is complete, whenever a new event is created, the primary nodes will send it to the secondary node as well, for storage. An important aspect is that secondary nodes only receive events, they do not need to provide acknowledgment for the transaction to be committed.

The entire flow is laid out in the figure below. We first mark the node with a secondary role which triggers the process of that node receiving the events, storing it and acknowledging the catchup. Once the ack is received, the primary nodes will start deleting those events. This enables the allocation of more expensive disks for the primary nodes for an optimal storage architecture. 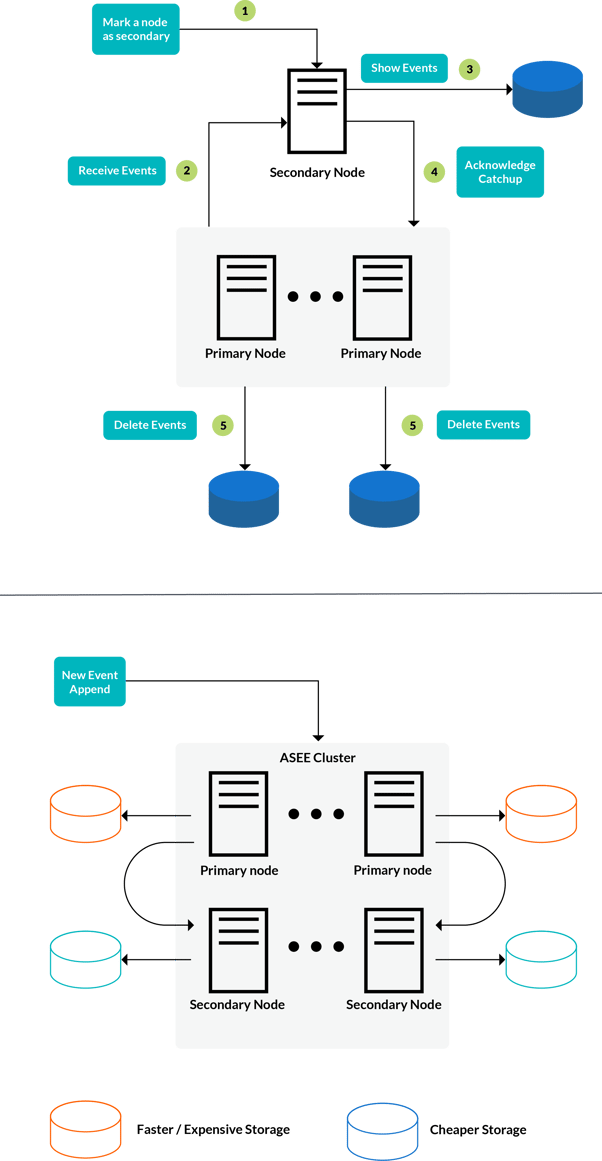 How do you assign a secondary server role to a node?

There are three ways you can assign a SECONDARY role to a node within a replication group:

Once you have defined secondary server nodes for a replication group, this definition will apply to all contexts that are defined in the replication group. You can configure the retention time per context (on the primary), so for some contexts, you may have a longer retention time than for others. As the old data still needs to be available at least one Secondary node needs to be up at all times. So it is recommended to have at least two Secondary nodes.

To conclude, secondary nodes offer the best mechanism to optimize and save on your storage costs with ASEE deployments.

Would you like to learn more about Axon Server Enterprise? You can book a conversation with us through this link.

Looking for something else?

Segovia and the use of Axon Framework